Published Date : May 2, 2021
Chief Minister Shankar Pokhrel of Lumbini Province taking the oath of office and secrecy on Sunday, May 2, 2021. (Photo: ET)

BUTWAL: In Lumbini State, after Shankar Pokharel was re-appointed as the Chief Minister, one CPN (UML) lawmaker has resigned from his post while two others have left.

Due to which Pokhrel is in more crisis. Dugnarayan Pandeya, elected from Kapilvastu Constituency No. 1 (a), has resigned, while Dharma Bahadur Lal Srivastava of Kapilvastu-2 (2) and Ajay Shahi of West Nawalparasi (2) have left Chief Minister Pokharel and joined the opposition alliance.

A team of Maoist Centre and Nepali Congress MPs has reached the office of the state chief with their signature. Today, Bimala Oli also joined the Maoist Centre.

Though state chief Dharmanath Prasad Yadav has appointed Pokhrel as the chief minister as per Article 168 (1) of the constitution, the opposition alliance is protesting. Chief Whip of the Nepali Congress, Fakhruddha Khan, said that 42 lawmakers have now staged a sit-in at the state chief’s office.

He said that the state chief should work according to the rules and regulations and Pokhrel’s re-appointment should be revoked. 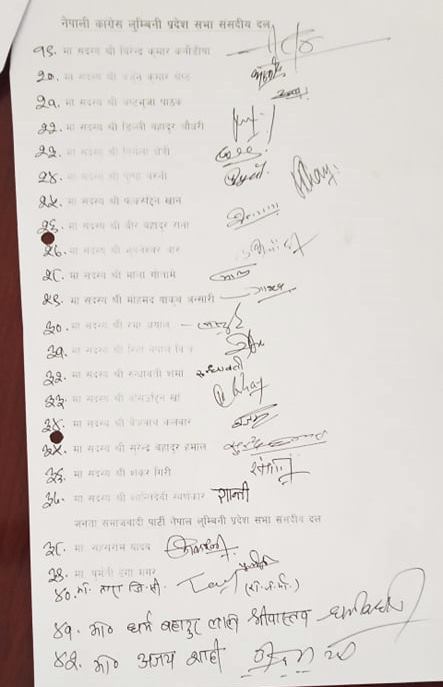 Domestic, international flights to be banned from Thursday midnight

Preparations to send Airbus to China to bring 2,000 oxygen cylinders